The Ghosts in the Hills

After being abducted by the revolutionary Maoist militia in Nepal, a 10-year-old girl sets out on a decades-long journey of indoctrination, war, love and betrayal.

Krishna Upadhyaya has been active in human rights and anti-slavery work for more than three decades through campaigns, development interventions, research and teachings. He received his PhD from SOAS (University of London) on ‘International Humanitarian Law and Vulnerability: The Tharu Experience of Nepal’s Internal Armed Conflict’. Born in Nepal and raised in Assam (India), he has extensively worked in and on human rights issues in the countries of South Asia. He currently resides in London.

The Ghosts in the Hills – The Girl and Her Mother

The cars rushed past them on the road, and the women on the pavement were covered in thick brown dust under the mild October sun. On both sides of the road lay vast paddy fields spreading out for several miles. Beyond that on the hills were the trees, eyeing them frighteningly as they stepped on further. They gazed at the view in awe as they walked towards their destination. 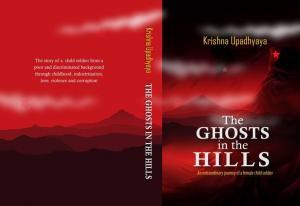 They had been walking for seventeen kilometres through the dusty pavement to Tulasipur town with loads of firewood on their heads. They then sat on the town’s pavement where they sold their loads –making just enough for a couple of days’ worth of food. After they sold their firewood, they wandered around the shops in a strange daze of relief and anxiety. They then found themselves in a grocery store where they quickly bought some rice and lentils, after which they began to rush home on foot. All the women were wearing their old slippers, some tattered, others worn out. The sound of their footsteps created a rhythm, and the sound became louder and quicker as they made their way home.

There was no wind now. Dust was not gathering on their heads anymore. Nor were they sweating, as they did not have any firewood to carry. The women stopped in the middle of the dusty road and looked up at the sky; their eyes fixated intensely on the movements of the celestial bodies with apprehensive curiosity.

It was the day of the full moon. Although it was still daylight, the sun and the moon were visible. However, the sun was due to set soon, and the women started becoming visibly anxious due to this.

As they walked, they continued to look up at the sky. The women needed to arrive home before sunset as they needed to bring home their goats and cattle before it got dark. Their worry about being late made them advance faster to their destination, about two hours walk away. They knew from experience that the shrill howling from the hills would start soon as it always did on full moon nights. The deathly screams in the twilight would sicken them to the point of panic.

‘Hurry up!’ one of them said. The women began to move quicker as the time of sunset was fast approaching. Finally, in relief, they arrived home just before sunset and proceeded to secure their livestock. Then, as per their group’s tradition, they huddled together under the poplar tree in the middle of their thatched huts. They felt the cold breeze from the hills bitterly piercing them as they sat together in a circle. The poplar leaves made a constant bristling sound as the women nervously uttered their thoughts and feelings about the ghosts in the hills to each other.

An hour before sunset, the children of their village came out of their local primary school on that frigid October day. They competitively ran towards the tacky main road together before taking their separate paths to their houses. Some of the children were barefooted, their soles crusty due to being hardened by the constant barrage of rocks and stones they trampled on. They walked through the soggy terraced paddy fields and played there noisily as they waited for Janaki, their teacher.

Janaki stepped out of the school and scoped around for them, the children of her village in her naturally calm yet slightly intimidating demeanour. She had a tranquil grittiness about her- one that only comes through the experience of knowing, dealing with and being intimate with her darkness and strength within. Her eyes radiated with life, yet they had a dark, serpent-like quality to them, which notably unsettled people but simultaneously drew them in. She was a lady of few words and never spoke more than necessary, yet her aura and presence dominated most conversations covertly. A gentle breeze swept her long black hair across her face. Her long slender arms reached out to move the inch back behind her ears as she spotted the children in the fields ahead of her. She smiled faintly as she began to walk home briskly in her sky-blue blouse and long black sari hanging from her slender waist to her ankles. She attracted the students and the nearby adults as her presence effortlessly radiated quiet confidence that a rural Dalit woman had never seen before. She stopped near some swaying bamboo bushes to give way to a few children running to the village as she smiled at them.

Some children always wanted to show up before ‘Miss Janaki’ arrived at the Diyale Sarki Village. Her house stood slightly isolated at the edge of the village. Beyond her home flowed the Ratey Khola River, its deadly currents meandering dangerously close to the town during monsoon. Overlooking the city stood a forested hill that stretched as far as the eyes could see.